I have just seen a funny picture: 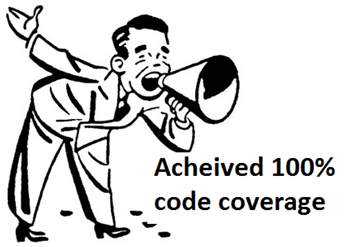 While 100% looks nice, if a developer cares only about covering all lines, 100% coverage gives false sense of security.

For example, below is a (greatly) simplified code from a real project (the real code was much more complex and had more conditions, therefore the evident bug was not that evident):

We have the following set of tests:

It is easy to see that this set of test a) covers all lines, b) covers all branches. Therefore the coverage for this method is 100%.

However, these tests do not cover all possible code paths: when both condition1() and condition2() are false, the resulting SQL query will be invalid. Thus, we need either one more test or to rewrite a code so that the query always remains valid.

So, is the code coverage important? Sure it is: to rephrase Dick Brandon, it is like sex; when it’s good, it’s very, very good, and when it’s bad, it’s better than nothing. But code coverage alone is not enough to estimate maintainability of the code. Personally I would prefer to spend more time on decreasing the cyclomatic complexity of the code than writing tests to cover all trivial getters and setters.